She’s here!!! Well, she’s actually been here for a couple of months but I’m just now feeling like myself again and feel ready to write this post. The newborn and postpartum stages were ROUGH (more on postpartum and nursing later), but we got through them and that’s thanks to some really great support and tools.

I’ll preface this by saying you do not NEED anything on this list. Babies are resilient and amazing and you are an incredible mom whether you use these or not. This was what worked for us, so I hope it works for you, too!

Additionally, this post is not sponsored but I would recommend using Babylist for your registry. It groups all your registries into one list that allows guests to price match and ship directly to you.

The Nanit is first on the list because it is by far, hands down the best gift we received. Vivianne slept in our room maybe a total of three nights before we couldn’t take it anymore. Love her to death, but I’m convinced she is the loudest sleeper in the entire world. We moved her to a swing (that’s also on this list) in the living room so we could take shifts sleeping, but even that got old very quickly when my husband went back to work. Enter: Nanit.

Vivi was three weeks old when we moved her to the crib in her room. Now before you get all preachy, her room is approximately 10 feet away from ours, and the insights on this baby monitor are better than any monitoring I could do on my own. It monitors her breathing (it will sound a massive alarm if her breathing stops), the room temperature (which is important because of the risk of SIDS), humidity, her sleep patterns, and I can see it all on my phone. Even better, it has night vision so I can see her more than when she was in the bassinet beside me, and the app has night mode which allows the monitor sound to play behind other apps and even when my phone screen is locked. It gives me so much peace knowing she’s safely sleeping, and I can go about my way doing all kinds of fun things like sleep and showers.

From here on out I will always gift new parents with a Nespresso machine. This beauty showed up INSIDE our house upon arriving home the hospital (true story, I had no idea who dropped it off and it was a happy mystery for weeks). As someone who even before baby had the bad habit of letting a coffee go cold, this has been a Godsend. When Vivi starts to wake I prep an espresso with coconut milk creamer and by the time her diaper is changed my coffee is ready and I’m all set to nurse her.

Life hack: purchase this secondhand. Ours is used and it doesn’t make a single difference of how much it costs – just that it makes coffee that packs a punch. Also, Sam’s Club and Walmart sell the pods in a party pack for way cheaper than you can get anywhere else.

Prior to having a baby I didn’t think about silly things like The Witching Hour. Vivianne was on no sort of schedule, so I was used to nursing her to sleep when she got fussy. Gas pains threw us into a tailspin; no amount of nursing, shushing or cuddling could stop the tears. According to her doctor, babies aren’t born with the ability to squeeze their sphincter which makes bowel movements painful. Our girl had a heavy dose of the gas pains and through eliminating gaseous foods from my diet and adding Mylicon drops, they lessened a bit i.e. they stopped after 3 months and could have been something she just had to grow out of but they made me feel more in control.

Speaking of gas pains, the fridababy Windi truly works for quick relief. Pro tip: buy the knockoff version from Amazon to save money because these aren’t reusable and I was using up to three per day at the height of the screams. Pair this with bicycle kicks and massaging baby’s belly (tummy time helps, too) for maximum effect.

Enter: how I managed to get any sleep and housework done the first three months of Vivianne’s life (also mentioned above in the first tip). This gliding swing vibrates as well, and that deadly combination keeps baby asleep for hours (true story: I had to go to the doctor in Gainesville so Kendrick stayed home to watch her, and she slept in this for a full three hours until I returned home). Even now it’s the only way her dad and babysitters can get her to sleep. Swaddle, feed, pop a paci in and voilà, a sleeping baby. ALSO, this reclines so if you have a baby with reflux or likes to sit up (Vivi is both), this is a game changer.

Confession: Vivi still sleeps in this inside her crib and she’s almost six months old. Safe sleep, I know, but she doesn’t roll and feels so snuggled it’s the only way we can get sleep. I’ve tried countless times to remove it and she can tell she’s not being hugged aka starts crying so I cave. I know I’ll have to bite the bullet soon and remove it all together but until that day I’m in sleepytime bliss. You can be, too! It’s also great for naps and lounging around the house while you do fun things like fold laundry beside her.

p.s. I AM NOT RECOMMENDING YOU LET YOUR BABY SLEEP IN THIS UNSUPERVISED, I am simply sharing how my family uses it. How you use it is totally up to your discretion and comfort level.

Babies throw up. A lot. I’ve found these are the thickest, most absorbent burp cloths. We were gifted two packs and I bought two more, so I’ll say buy as many as the days of the week you won’t want to do laundry (there are a lot).

Diaper bags are necessary, but I would fully recommend getting a backpack version. As a mom you need all the hands free, so putting this on and not having to worry about it going rogue and falling off a shoulder is a plus. Also, dads don’t mind carrying backpacks as much as purses!

A common misconception is the idea that you need two car seats. You do not. We take Vivianne to daycare splitting the responsibilities, so we each have a car seat base and wherever Vivi goes, the car seat goes. Car seats can be very expensive and shouldn’t be bought secondhand (safety recommendations change and if the car seat has been damaged in an accident it isn’t safe for your baby). Buying an extra base instead of an extra car seat will save you hundreds.

A sound machine is a MUST HAVE as far as I’m concerned. We have the Hatch Rest, but they now carry the Rest+, which will grow with your child’s needs and I would recommend spending the extra $20. We live on a very loud street and had a one-month-old on New Year’s, so this thing was a life saver. She sleeps through every sound (we cook dinner after she goes to bed and she has slept through pans banging together), and we don’t have to worry about walking on eggshells. I’d also recommend getting a travel sound machine, so baby can sleep on the go. Vivi is now trained that when she hears that sound she starts to lull into a sleepy state. You can also use a white noise playlist on Spotify or YouTube, but I’ve found that I like to have my phone free for audiobooks and podcasts while she sleeps and I can’t listen to them if I’m using it to play the white noise.

Trust me when I say there is nothing worse than changing a baby’s diaper in the middle of the night and them wanting to play. The horror. My momma shared the wonder that is sleep gowns with me and I’ll never go back to button down pajamas (the only thing worse than the above mentioned). Instead of jostling baby, you simply slide the gown up, change the diaper and tie again. Simple, easy, and baby goes right back to sleep.

I have tried every diaper cream. Every. Single. One. I love Boudreaux’s Butt Paste. It’s thick and sticks to baby, whereas a lot of them slide right off or aren’t thick enough to create a seal between her booty and poopy. Diaper rash is so painful and sad to see your baby suffering, so I’d say find one you like early on and stick with it. Pro tip: I’m obsessed with this diaper cream applicator and it’s ability to keep my hands clean (and not waste a wipe). I’ve also used this applicator for travel and it is SO handy to have on hand.

First off, you do not need to buy any baby carrier new. I bought our ergobaby structured carrier on Facebook Marketplace for $20 and was gifted a Wildbird ring sling. I love both for different reasons: ergobaby is more structured and was a lifesaver for travel where I needed more back support (get the newborn insert for the early days), and the ring sling is perfect for every day wear. In her infancy when Vivianne cried nonstop from gas pans, she would immediately fall asleep on my chest when I put her in the sling. The position of her knees up in an “M” position and her bum down forced the gas out and the bouncing of my walk and heartbeat lulled her to sleep right away. Let me tell you, you will pay any amount of money to get a sobbing child to sleep, and these you can get secondhand at both Facebook Marketplace and Poshmark.

As mentioned above, Vivianne had awful gas pains (many people call this colic), and they usually got worse when taking a bottle. We invested in so many bottles and this is our top choice now. The shape helps eliminate gas, mimics breastfeeding and helps prevent nipple confusion, and protects the nutrients in your breastmilk when heating. She’s since graduated to the larger silicone option, but the original design was critical in those early days.

I could go on and on, but if we choose to have another baby these are the items I would definitely invest in again. Like I said at the top, you do not NEED any of these things, but they certainly make things a lot easier in the first few months. Please know you are the best parent for your baby and as overwhelming as this season is, things WILL get easier as they age. For now, focus on leaving the house once a day (even if it’s just to the end of the street) and try to sleep when the baby sleeps (I know it’s tempting to watch Netflix but you need your rest for the long nights). You are more important now than ever before, and your job as a parent is so valued. Good luck and reach out to me if you have any questions or need advice. 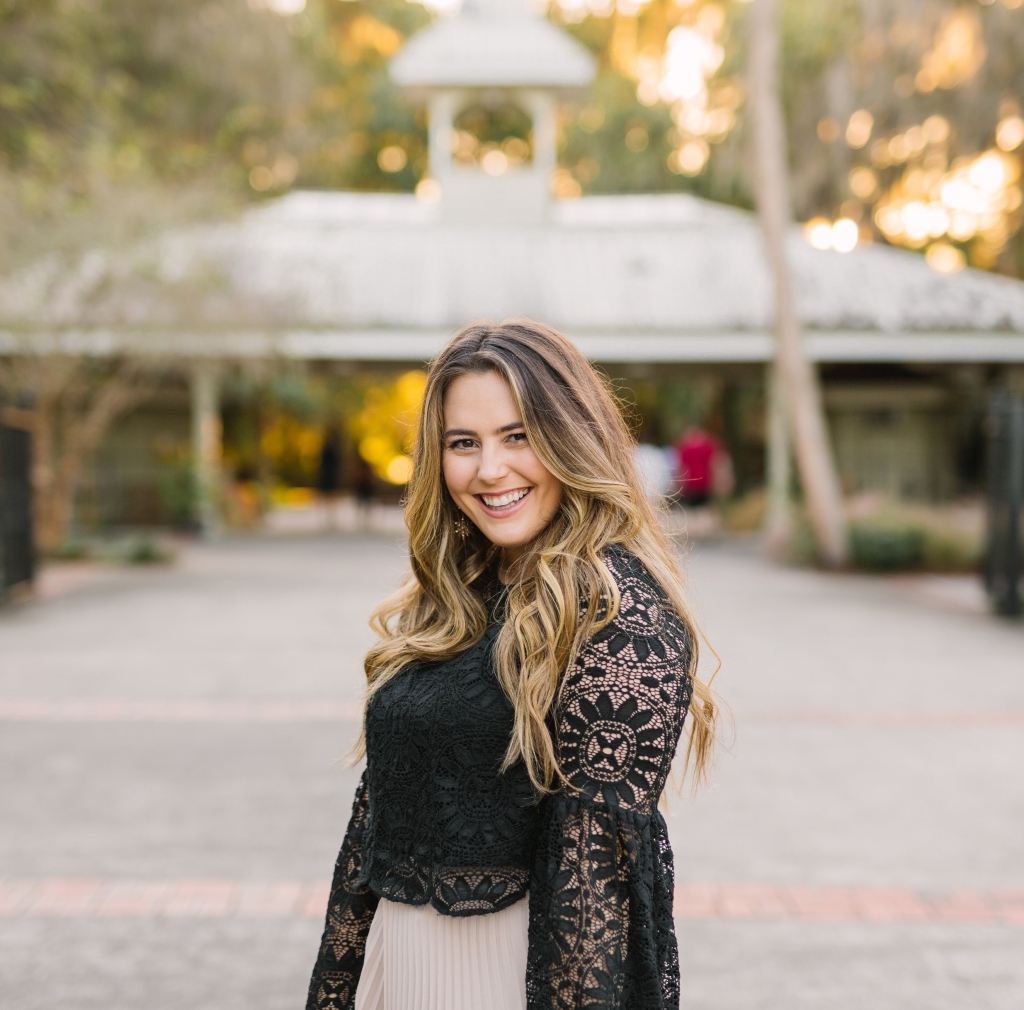 Hey there! My name is Kaitlyn Butler, and I go by Kait! I love online shopping, eating well and living well! I live in Ocala, Florida with my husband, staying busy with a variety of community events and local offerings. I studied public relations at the University of Florida (Go Gators!) and love interacting with all types of people. My blog is primarily focused on fashion, food and fitness. Thanks for stopping by — I hope you stay a while.